Planlux developed architectural lighting design project for Cinemaximum Zorlu Center by Mars Entertainment Group, architectural design by Geomim. Article about the project by Başak Okay Owing to its great architectural concept by Geomim, this public area is a unique and modern movie theater. The concept is primarily based on the digital world in the sci-fi movie ?Tron?. The conceptual design based on visual and notional contexts of the movie also builds a strong connection with the functions of a movie theater. An outstanding futuristic space is formed which aims to totally break off the real world perception of visitors.

In the project, all volumes are defined as dynamic and exciting spaces, which feels like a different dimension different from the outside world. The aim was to create dynamic, fluid neon surfaces floating in an endless dark space. These surfaces expand by linking to each other in order to reflect the digital world ambience as described in the movie. In the foyer, there are suspended linear LED lights and LED screens with advertisements moving on. Columns are covered by media screens that show teasers. While you are hypnotised by those movements, you do not feel like waiting anymore.

The pre-function area is also occupied as a permanent exhibition space with illustrations of well-known movie characters such as Superman, Darth Vader and Spider-man. These characters are defined differently than their usual looks. Like in a computer game, they look like pixelised with the cubic illustration style. The Ironman illustration, which is covering a large area both horizontally and vertically, is one of the most important points.

During the design process, the main issue was to reflect the core concept clearly. Therefore, technical details like fundamental and ergonomic lighting criterias and luminaire detailing adopted successfully to this relatively dark concept. These common principles such as wall washing, guiding visitors with different densities of lights, highlighting the borders and differentiated charming  surfaces are used to make the visitors feel like floating in undefined space not only by keeping the general illumination levels relatively low but also feeling secure and comfortable.

A flexible control system – DALI – is used in this movie theater, which also has a unique digital infrastructure. Track spots aroused with Dali system send individual signals to each spot. This system thereby renders it possible to provide different illumination levels according the to image’s significant parts. Because of it was an unusual process for the application team, they had experienced difficulties whilst arranging the cabling and the rest of the infrastructure.

To provide visual comfort to visitors, powerful equipments with hidden light sources were used. Therefore, pendants with PAR30 lamps are hung at the same height with bases of beams, while their inner surfaces are painted black to avoid glare. Considering the corporate identity, magenta coloured linear LEDs are applied. However, they’re also DALI based RGB in order to provide flexibility for the future purposes.

For all disciplines in this project, creating a world in computer game in a movie theater with unexperienced lighting details, was such an experience, which made the client and customers satisfied. Products applied:  Wallwashers, Hoffmeister, Lone.ly by Hi-Tec /  Cylinder pendants, Track systems, Recessed downlights by AYS Lighting / Linear RGB LED fixtures by Idem Lighting / Media Screen & Pendants by MgiO technology 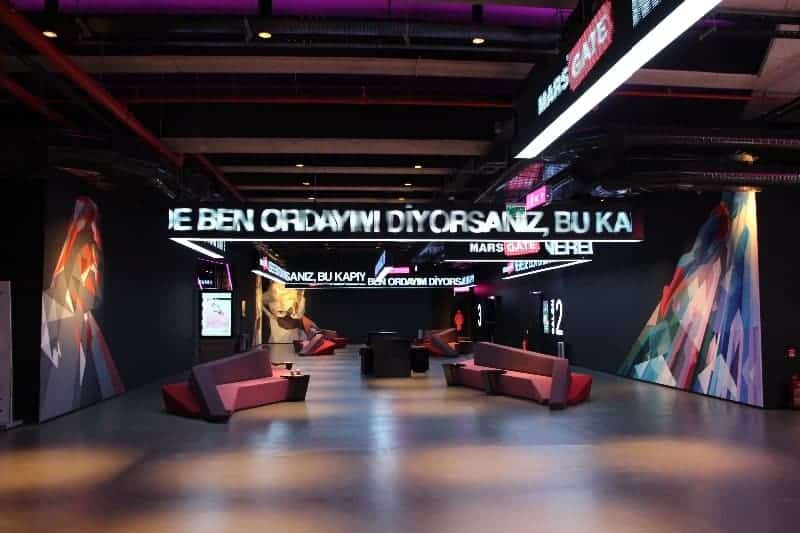 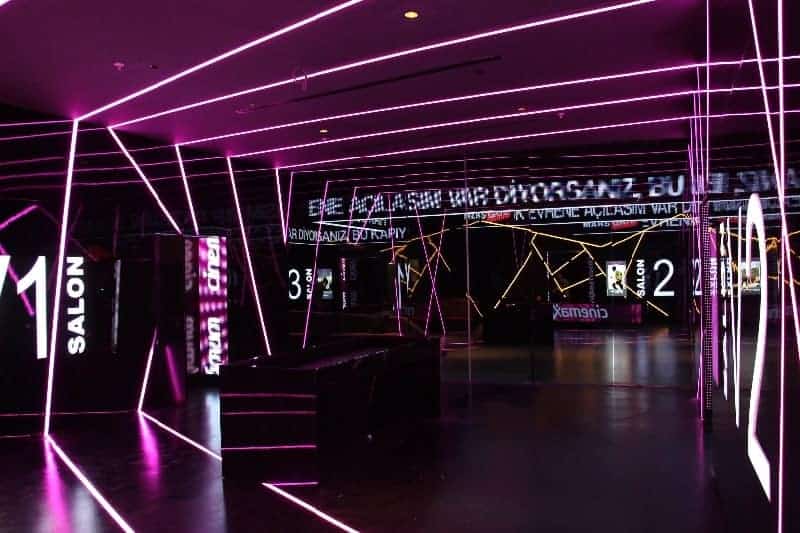 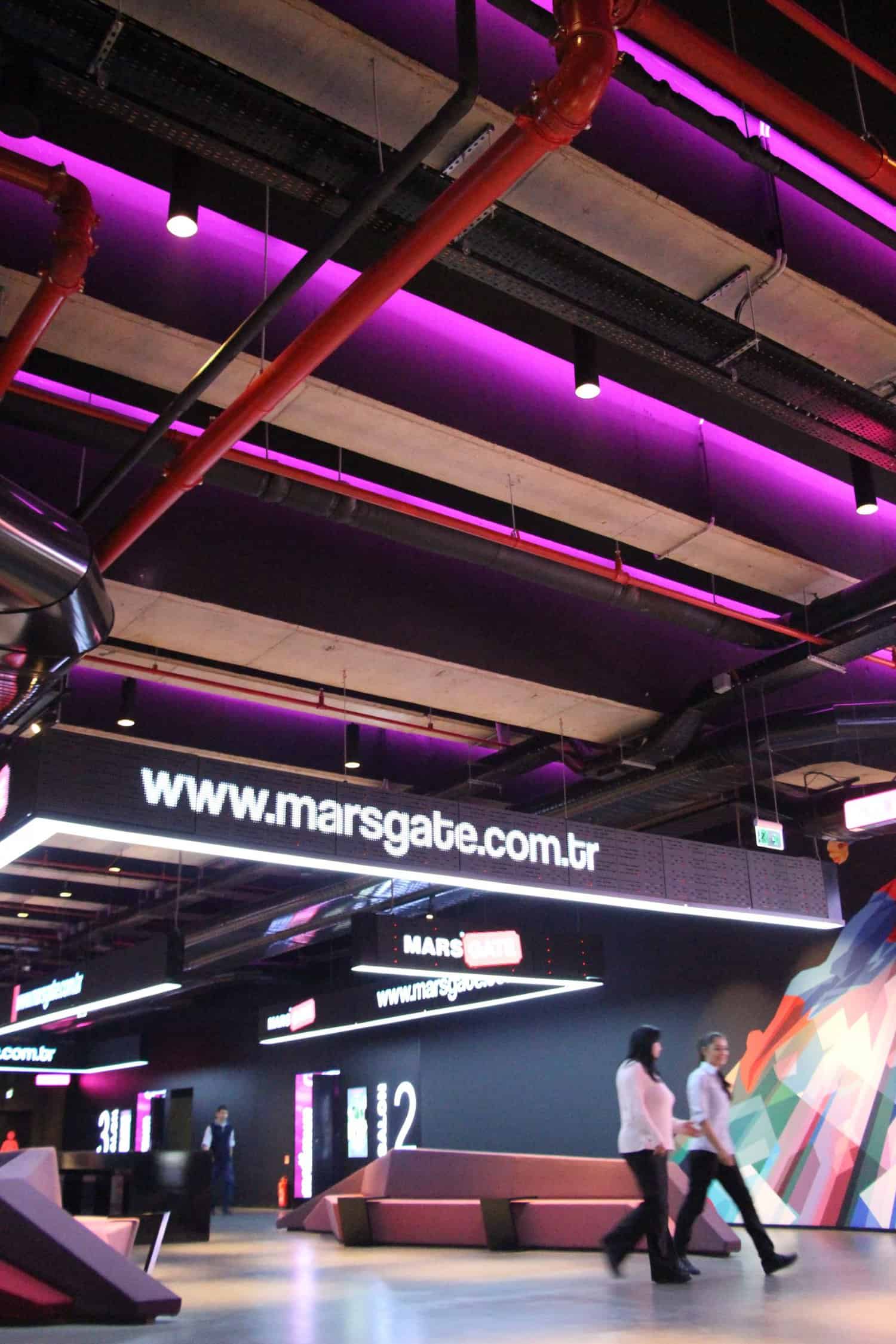 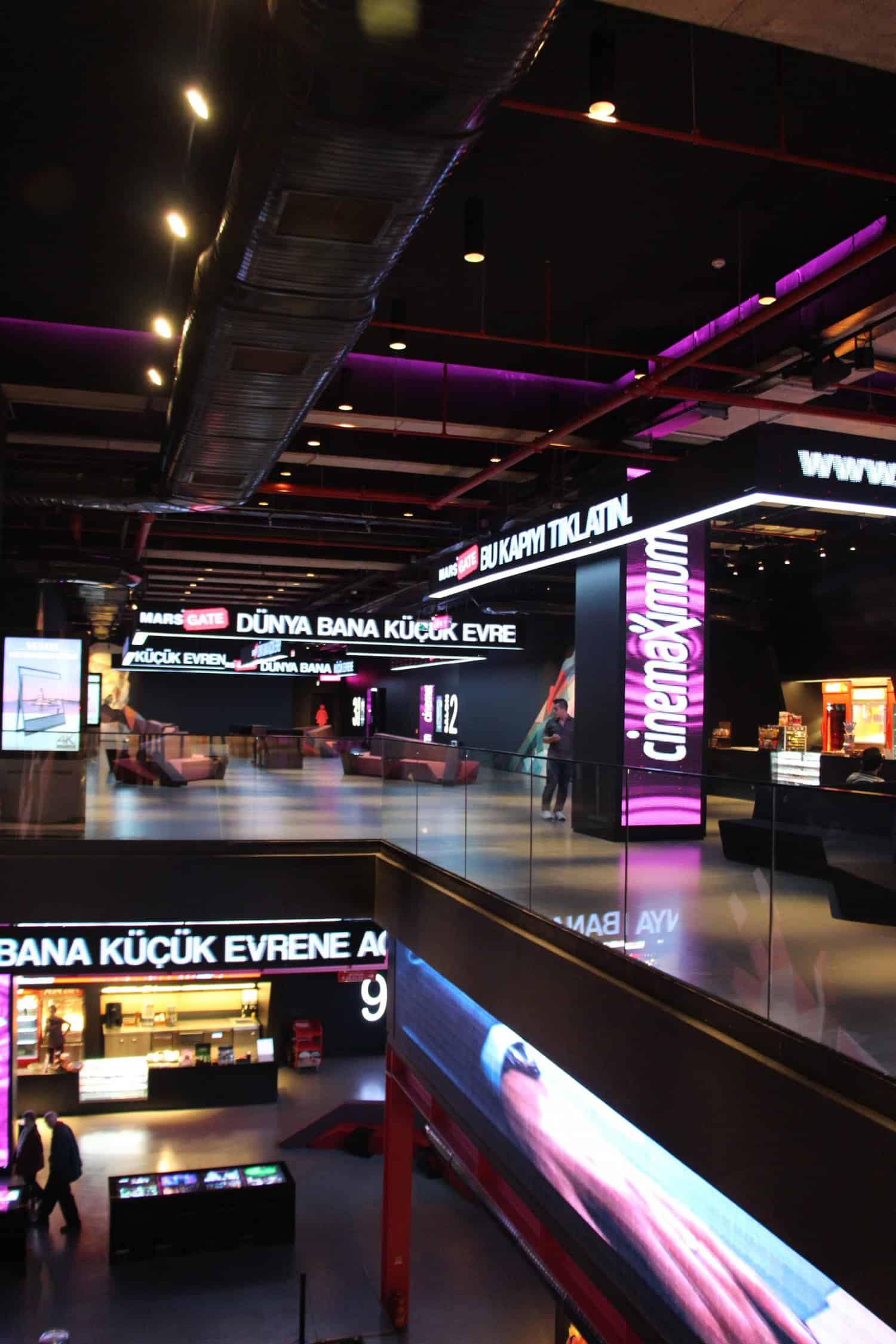 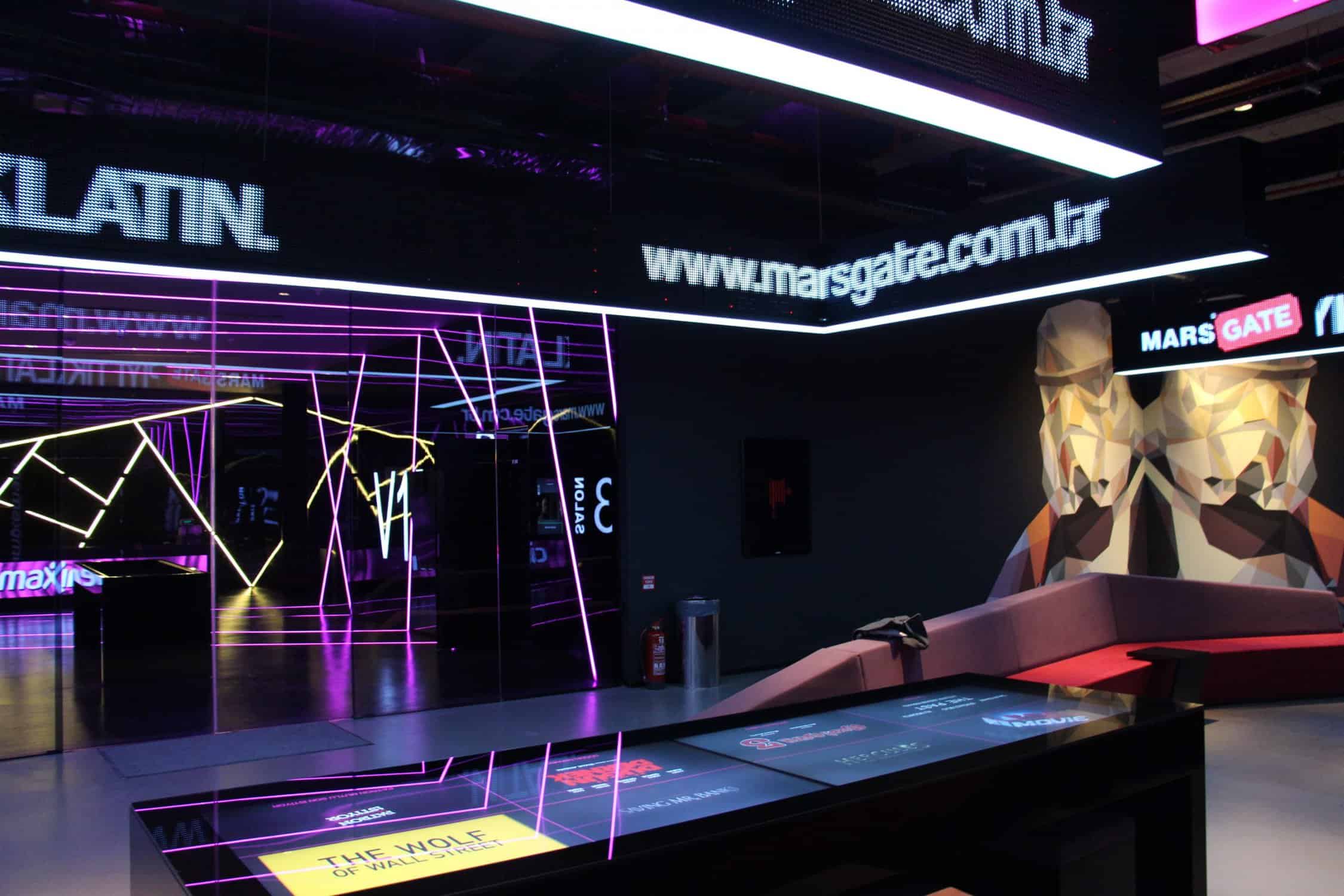 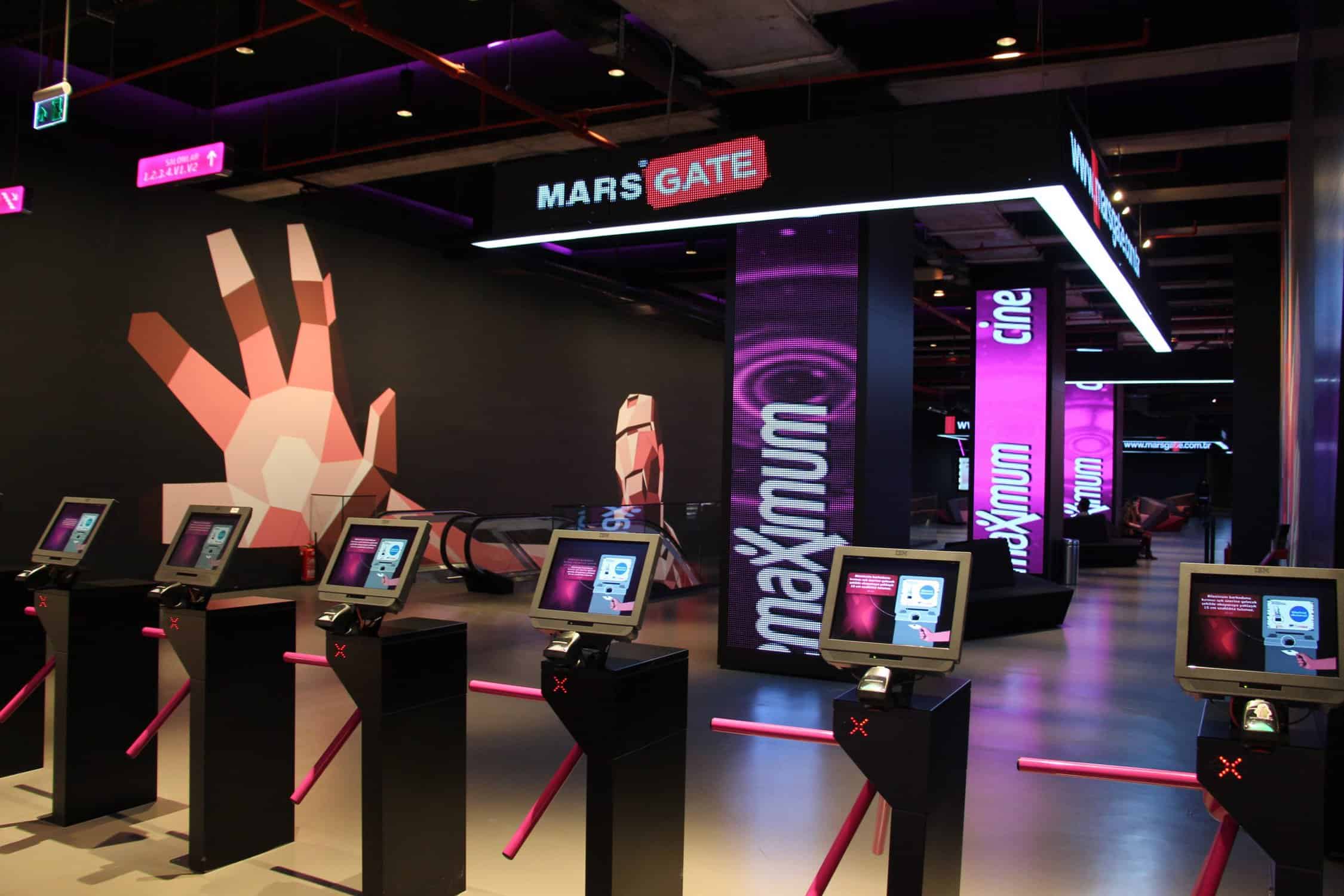